The Monk and His Whore

the one that got away 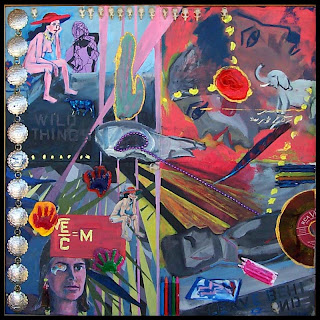 I was flipping around on the TV last night and I happened on one of my all time favorite movies; "The Fugitive Kind".  In glorious black and white, the 1960 movie stared Marlon Brando, Joanne Woodward and Anna Magnani.  This movie was based on a play by Tennesee Williams, "Orpheus Descending"  which itself was based on the classic Greek myth of the god of music's descent into the underworld to rescue his bride, Eurydice, from death.
The sexy, guitar playing, Val, comes to the small town and falls in love with the mature Italian woman, Lady.  Their romance is hindered by the fact that she is married.  Her dying husband's spirit is as sick as his body.
The small minded townspeople are also jealous of the lovers' new found passion.
One of the most beautiful scenes in the movie is in the newly completed "confectionery".  Val has helped Lady realize her dream of creating a darling terrace off the store, where she hoped to cultivate a sparkling night life for the small town.  She has just found out that she is pregnant... it is Val's child.  After countless years in a barren marriage, she is overjoyed that she has finally found a love that will bear fruit.
Lady recounts the story of a fig tree she owned that never bore fruit, everyone thought it was barren.  After many years it produced a small fig.  Enchanted with the small miracle, she pulled out her Christmas decorations and embellished the fruitful fig tree with her glass birds, icicles and delicate ornaments.
Dancing through the confectionery she cries

They embrace tenderly.  And then... well you know if you've seen the movie, and if you don't know, I won't ruin it.
At the end, Joanne Woodward's character holds Val's snakeskin jacket and says... (to paraphrase)

It was this prose that inspired the name of my multi media painting completed at UC Davis in  2001.  My painting "Wild things.... Leave behind"  is embellished with mouse skulls and bones, feathers and footprints.  These tokens I received from friends there (Troy Dalton and Michelle Disney)  who believed as I do in the reverence of nature and its creatures.  love animals